I’ve come to the realization that one of the reasons I cannot get my vocals to sit properly in the mix, is that I have too much reflection in my room. As I was considering this possibility, Fett, an engineer/producer whom I respect, sent out an email pointing to this blog post of his called 7 Dead Giveaways That Your Production Is A “Home Recording”. Sure enough, number two was Home Recording Dead Giveaway #2: Too Much “Room” In The Tracks – Especially Vocal Tracks. With this confirmation, I set out to put together a quick and dirty “vocal booth” for my “studio.” (Yes, both in quotes, because either is neither.) The first thing I need to point out, is that my office/studio is the very first thing you see when you walk into my house, so the goal is always to keep that area neat and tidy as possible. As an organized, but messy person, this is not an easy task. 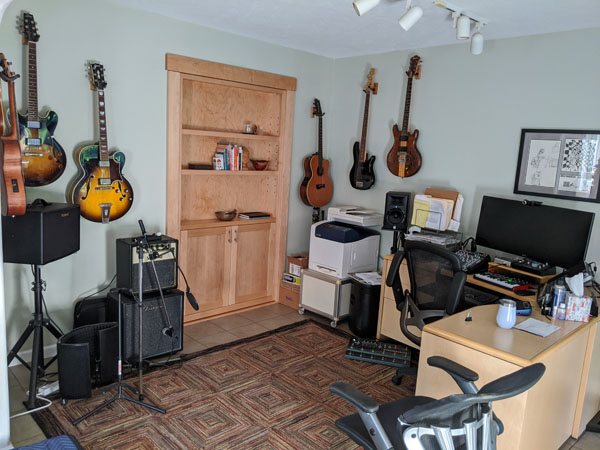 The first thing you see when you walk in my house.

One of the cool features I added when we bought the house was a Murphy Door. Behind where the bookshelves are now was just a big hole. I designed a Murphy Door and had a local woodshop build it for me. This became the first wall to my “vocal booth.” 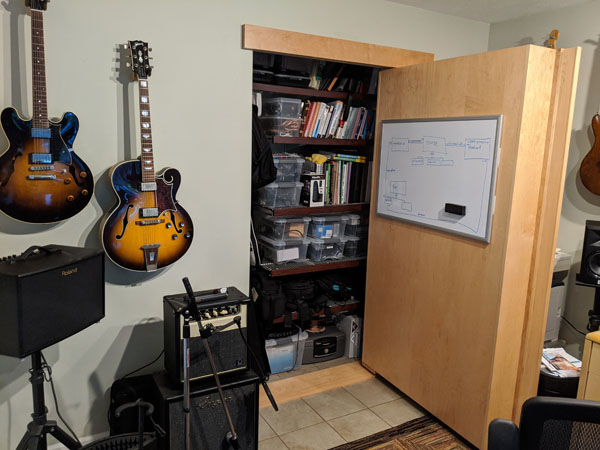 The Murphy Door to hide my clutter

The next step was to build a small rack to hang some moving blankets on. I drew up what I thought would work, and went to Home Depot to pick up what I needed. Less than $150 later (which on Maui is no small feat), I had my supplies and started building. First the rack. 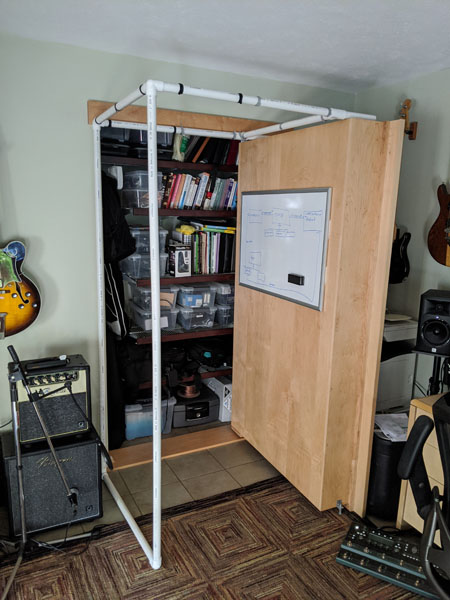 The rack on which I hung the moving blankets

I had to add grommets to the blankets, which probably took the longest of the whole project. Then I used some small velcro strips on the bars to hold the blankets. Oh, and on top of the door, I used a couple of Commando Strips to velcro the PVC to the door without obstructing its closure. 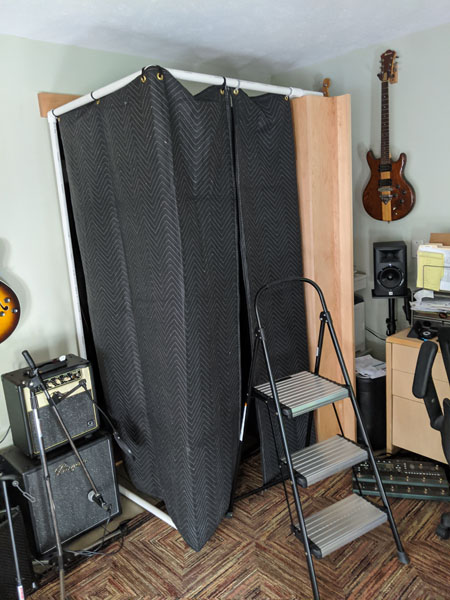 Walls hung. I’m still debating whether to put the blankets inside or outside the poles

I just loosely draped the third blanket over the top. This works just fine, but I may use some vise clips to secure it. Probably not necessary.

Final product looks like this. It all collapses down and fits into the closet. 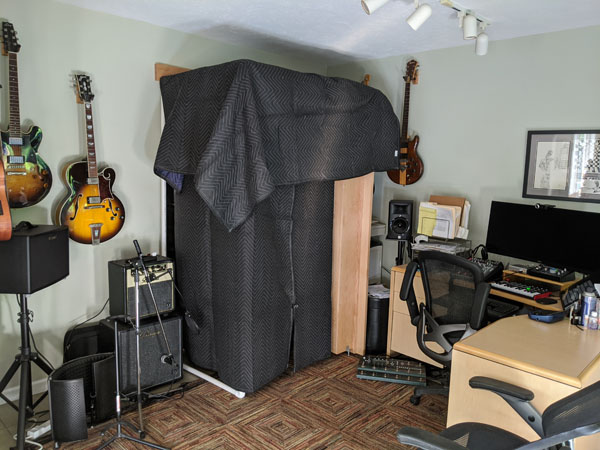 All told, I built this in less than two hours. Word of advice to anyone who wants to do something similar–get some PVC cutters (don’t use a hack saw). They were a godsend.

I record on my own, so to control my DAW while in the booth, I plan to use an old Frontier Tranzport. I’ve had it for years, and it’s still working like a champ. Perfect for this kind of thing. It’s blue tooth and totally portable.

All I need now is an LED lamp, because it’s dark in there. It’s also going to get hot. I won’t be able to spend too much time in there without sweating like a pig, but hey–no more reflections! The difference is amazing.

I hope you enjoyed my show and tell. I just felt like I needed to share with someone. Let me know what you think in the comments?

This site uses Akismet to reduce spam. Learn how your comment data is processed.